Week three started with the first big interstate trip, off to sunny Adelaide!
It's been over 40 degrees there for about two months, followed by ridiculous floods, so I was a little nervous as to what weather would hit me. Turned out it was mild 22C on both days - but the South Australians were so used to stinking hot, many were wrapped up in scarves and jackets!
Things started well at the big Dymocks store in the city, where I was delighted to meet Sharon Lomman once again, who bought the original series from me and then has come in each time for each new book, finishing with Wall Of Spears this time. As usual, there were so many lovely people there and I was down to the last Bridge Of Swords when it was time to go.
Then it was off to the Angus and Robertson store in the Myer Centre across the road. It's a great little store and they're big fans of the Dragon Sword Histories, which is fantastic. There were a couple of strange characters there though ... a young guy in army uniform who kept playing with the animal puppets and asking people if they wanted to enlist and a bloke from country SA who wanted to buy my books but only if I could post them out to him ... anyway, there were many other wonderful readers!
Last store for the day was Mostly Books in Torrens Park and that was a lot of fun. At first I was worried, as there was a stand spruiking electricity deals just outside and competing spruikers are death to chatty authors! Luckily they were packing up and, even more luckily, the guy there, Lachlan, was a huge fantasy fan. We chatted on and off for an hour while he waited for a lift, then bought the whole of the new series. Meanwhile, I sold the rest of the Wounded Guardians and Bridge Of Swords. It's a lovely store and a great spot to chat to people!
Second day kicked off at Dillons Books Norwood. last time I was there, they had a massive storm and blackout, which cramped the style a little. This time they had been burgled overnight! Obviously thieves, being stupid, didn't touch the valuable books but instead tried for the safe, which they failed to open with a sledgehammer. Perhaps they couldn't read the instruction manual on the oxy torch ...
Anyway, despite me suspecting I might be some sort of unlucky charm for a great book shop, I met some fantastic people and sold out of all my Wounded Guardians and Bridge Of Swords. I actually had two people fighting over the last Wounded Guardian - it went to the very charming Ryan!
Then it was Collins Edwardstown and the fantastic Tarran Jones - if there is a bookstore more supportive of Australian fantasy in Adelaide, I am yet to find it! 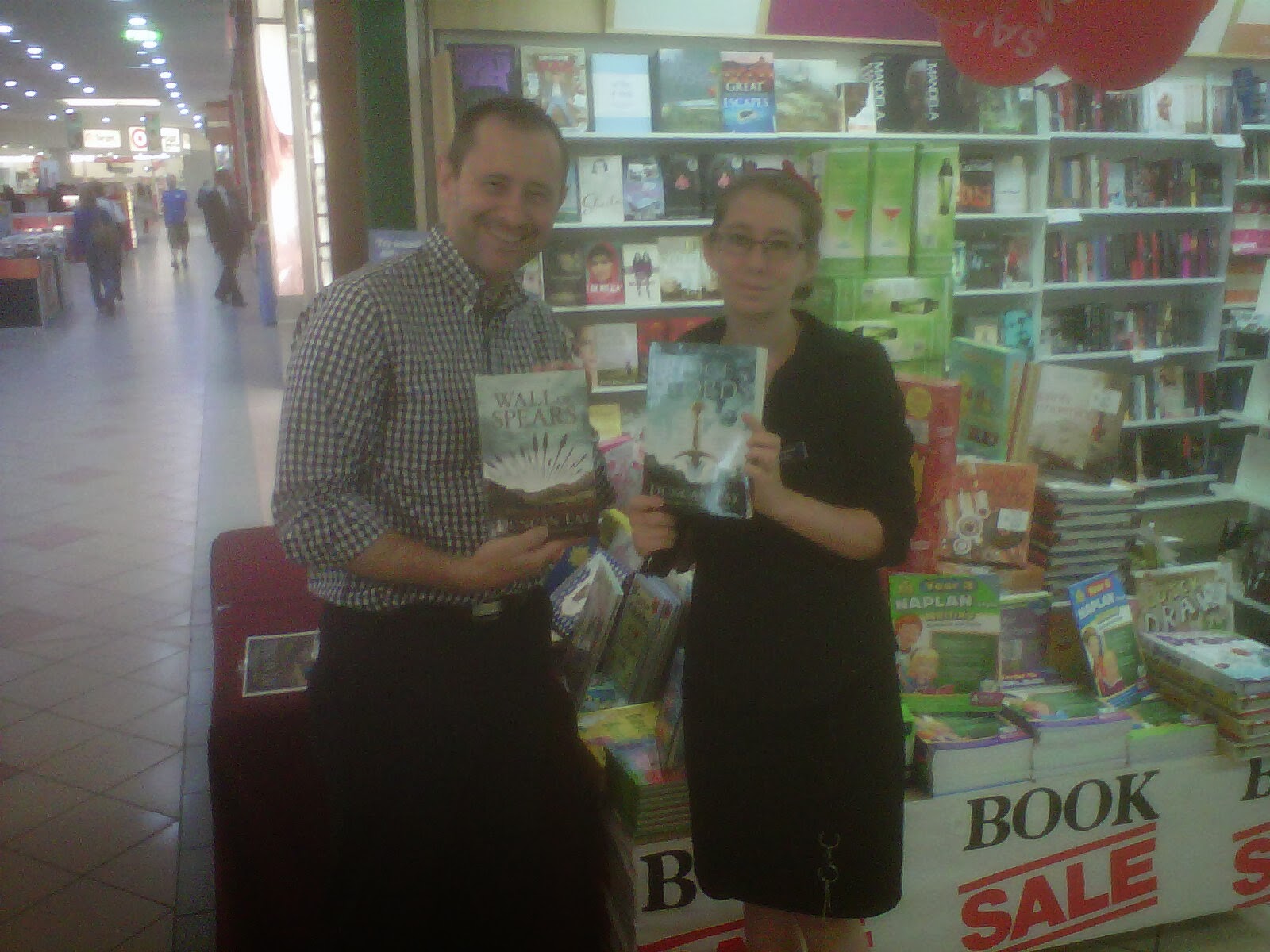 Finally I was at Dymocks Glenelg. Last time I was there it was so cold I could barely sign my name. This time it was warmer but seemed to be packed with German backpackers. For a while there, I was spending more time showing them pictures of the German translation books of The Wounded Guardian than I was talking about my English-language ones!
Saturday it was off to Dymocks Warringah, which is an interesting store. It was one of the few that didn't want to do the three-for-two special offer, which was a shame for the good people of the peninsula. Also, it was one of the few bookstores where eReaders outnumbered book readers. At most stores, there's always a few people who want to take a shot of the cover so they can get it as an eBook. At Warringah, it was almost 50-50.
And then Sunday I was off to Dymocks Penrith. That was simply fantastic. There was a queue of people waiting for me at the start and then it finished with a delightful lady called Enid (surname not Blyton!) who loved the Dragon Sword Histories and was there to buy Empire Of Bones. Penrith is, simply, wonderful to visit.
And then the week ended with Bridge Of Swords going into reprint again - for the third time.
Awaiting me is the biggest week of the tour - 12 stores in two states. Here we go ...
Posted by Duncan Lay at 7:34 PM